Back to Amazon.com
Hey, you can only buy 3 of these.
Leave some for the rest of us!
Update the quantity in your cart.
New
Limit 3 per customer

The Dooner the Better

Acidic: The quality of acid - usually excessive - on the palate.

Aroma: A smell or collection of smells inherent in the grapes.

Berrymandering: Occurs when a wine falsifies its berry qualities.

Bucket: The aroma a wine adopts as a result of bottle aging.

Decanticipation: Impatience that occurs while a wine is decanting. 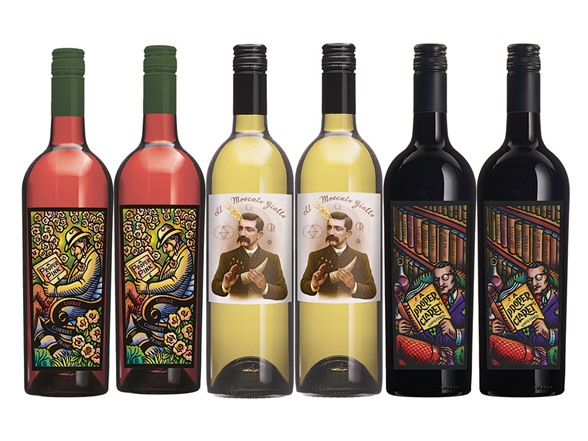 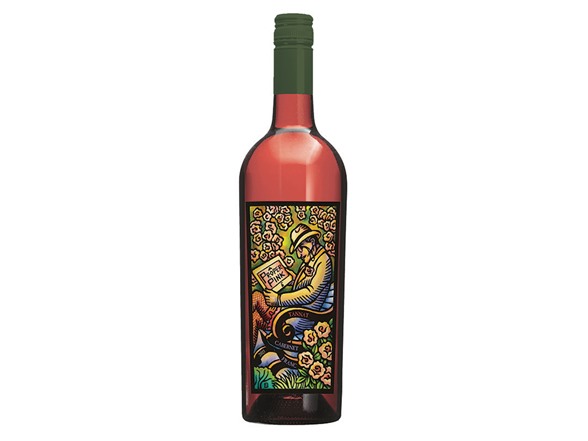 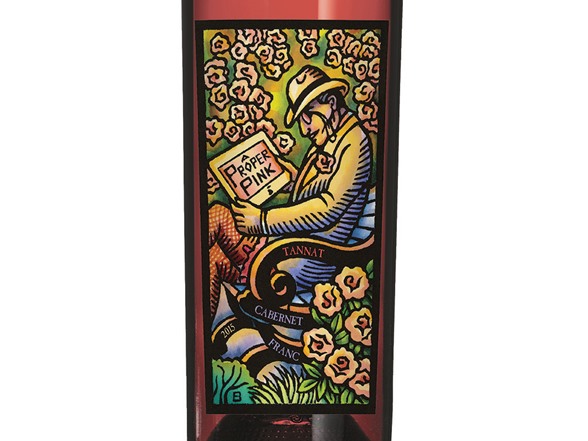 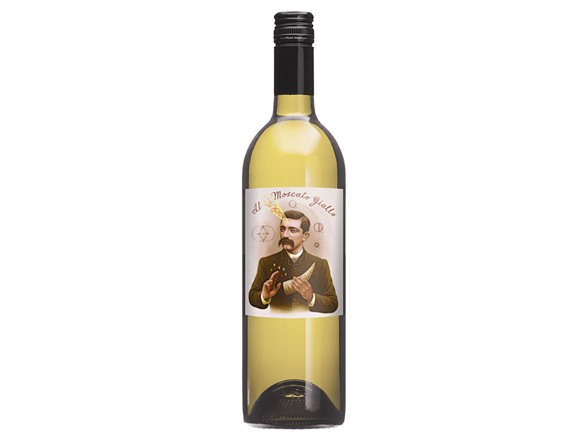 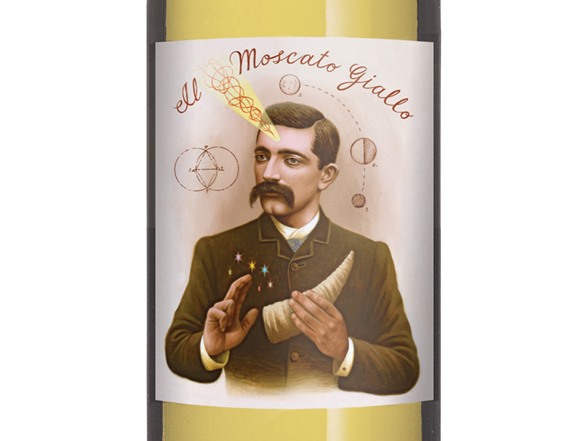 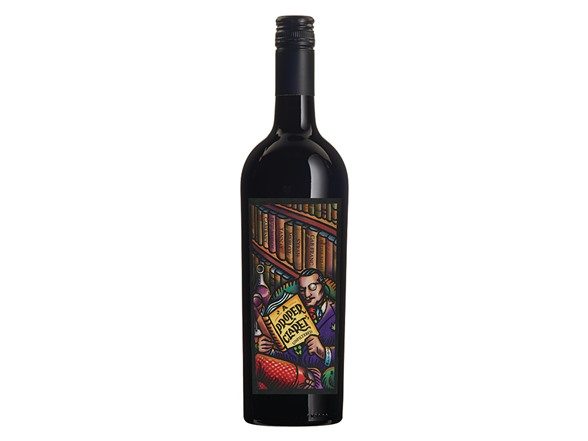 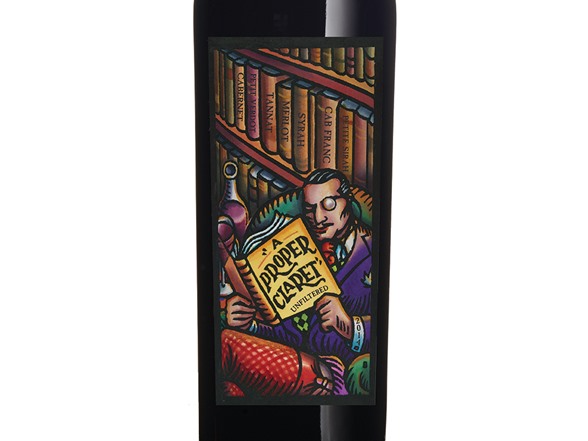 2015 A Proper Pink
A brief history lesson for young pups: The modern term for a proper red wine, derives from the poxy French word, “clairet,” or light, “clear” wine (Vinum clarum, as the Schoolmen would have it), designating a certain style of darkish pink wine much favored in the Middle Ages, not so very dissimilar to the wine you are currently holding in your hands, as you behold the majestic figure of moi-même, taking his ease sur le pique-nique. Any further questions. Class dismissed! God save the Queen!

So, what’s Tannat like (about a flamboyant and slightly (Im)Proper Pink)? It’s a relatively dark brosé, having languidly experienced several hours in contact with its skins before pressing on skins. But it is really the Cabernet franc that carries the aromatic day. The nose shows the sensuality of a fully ripened lychee, pink peppercorn, with a suggestion of the scent of the hard candies one formerly found at at an American General Store. The palate is full-bodied and slightly fleshy. Flavors of cherry, watermelon, pink grapefruit, and black raspberry abound. The finish is savory, mentally taking us back to Asia and the faintest suggestion of crispy pork skin. Serve well chilled to preserve brightness and acidity.

2015 Moscato Giallo
Moscato Giallo is one of the most powerfully aromatic and yet elegant Moscati one will ever experience.

The first impression is lavender, immediately followed by candied citrus peel (a cross of grapefruit and tangerine), and then one immediately senses just a great lushness, that you might associate with a musky musk melon, with the slightest trace of bitterness. Last call for linalool!
The experience of this wine – if I may be very direct - is very much like drinking perfume.

Food Pairing Notes: Ideal with a savory course like foie gras or a blue cheese cake appetizer, but also just fine as a dessert wine with a fruit dessert. Staff favorite pairings include spicy Sichuan hot pot, Korean cuisine, such as Bibimbap or Ojingeo Bokkeum (Spicy Squid Stir Fry), or Thai take out. A bit of spice plays nice when pairing the Moscato Giallo!

Some cautionary words: Bonny Doon Vineyard is, as we all know or should know, a strictly cabernet-free zone, at least it has been for the last twenty-nine years. The last “Claret” nominally produced at Bonny Doon Vineyard was in 1985 from grapes grown at our late Estate in the eponymous hamlet of Bonny Doon. It was a blend of approximately equal parts of cabernet sauvignon, cab. franc, merlot and malbec, and against all expectation, was actually pretty damn good.

Randall Grahm, owner and winemaker, has expressed indifference, occasionally bordering on amused disdain, for this popular grape variety. We are not really at liberty to say how Bonny Doon Vineyard has come to be entrusted with the distribution of a wine made from such improbably alien grape varieties, but suffice to say that the deal was doon grudgingly and harumphingly.
So, with these caveats, the sentiment at Bonny Doon Vineyard is that if we ever were to drink a cabernet-based blend, this would be one that would serve quite well. It is lean, neither overly alcoholic (weighing in at 13.2%) nor overly extracted, nor overly oakèd; it is precisely what one would imagine A Proper Claret to be. The wine contains a substantial dollop of petit verdot (22%), adding a silky note of violets and textural elegance, in counterpoint to the lead-in-the-pencil firmness offered by the inclusion of the virile tannat (22%). Tannat, the grape implicated in the French paradox (and the vinifera variety with resveratrol levels that are off the charts), is principally grown in Gascony (land of Les Trois Mousquetaires), though it was historically grown as well in Bordeaux as late as the 19th century. Comparing this wine with the 2013 APC, the second vintage, the ’14 version is a bit plusher and posher, with softer tannins, not unreminiscent of the overstuffed chair at one’s Club. There is still a lovely minty, cedary aspect to this wine, reflective of its perfect balance, with nary a prunish note to be found.

Now, as to the label. What can we say? We are just scandalized, sputteringly unable to countenance the opportunistic wine marketeers who would stoop to using lurid imagery merely to sell a bottle of wine. Has it really come to this? It is only because we enjoyed the wine so much that we are willing to put up with the tasteless monstrosity that is this label. “Proper” (!?!) Claret? Indeed.

While Bonny Doon Vineyard began with the (in retrospect) foolish attempt to replicate Burgundy in California, Randall Grahm realized early on that he would have far more success creating more distinctive and original wines working with Rhône varieties in the Central Coast of California. The key learning here (achieved somewhat accidentally but fortuitously) was that in a warm, Mediterranean climate, it is usually blended wines that are most successful. In 1986 Bonny Doon Vineyard released the inaugural vintage (1984) of Le Cigare Volant, an homage to Châteauneuf-du-Pape, and this continues as the winery’s flagship/starship brand.

Since then, Bonny Doon Vineyard has enjoyed a long history of innovation – the first to truly popularize Rhône grapes in California, to successfully work with cryo-extraction for sundry “Vins de Glacière, the first to utilize microbullage in California, the first to popularize screwcaps for premium wines, and, quite significantly, the first to embrace true transparency in labeling with its ingredient labeling initiative. The upside of all of this activity has brought an extraordinary amount of creativity and research to the California wine scene; the doon-side, as it were, was perhaps an ever so slight inability to focus, to settle doon, if you will, into a single, coherent direction.

Bonny Doon Vineyard grew and grew with some incredibly popular brands (Big House, Cardinal Zin and Pacific Rim) until it became the 28th largest winery in the United Stated. Randall came to the realization – better late than Nevers – that he had found that the company had diverged to a great extent from his original intention of producing soulful, distinctive and original wines, and that while it was amusing to be able to get restaurant reservations almost anywhere (the only real tangible perk he was able to discern from the vast scale of the operation), it was time to take a decisive course correction. With this in mind, he sold off the larger brands (Big House and Cardinal Zin) in 2006 and Pacific Rim in 2010.

In the intervening years, the focus of the winery has been to spend far more time working with vineyards in improving their practices, as well as on making wines with a much lighter touch – using indigenous yeast whenever possible, and more or less eschewing vinous maquillage, (at least not to Tammy Faye Bakker-like levels). Recently, Randall has purchased an extraordinary property in San Juan Bautista, which he calls Popelouchum, (the Mutsun word for “paradise,”) where he is profoundly intent on producing singular wines expressive of place. There are also very grand plans afoot to plant a dry-farmed Estate Cigare vineyard. #staydooned.